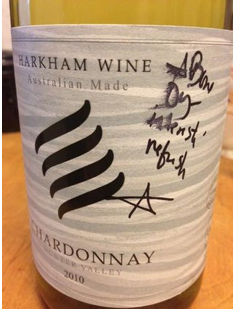 This is historically significant as Richard Harkham is the first total natural wine enthusiast who is also shomer shabbos. When Richie says he makes wines without preservatives, he’s not talking about condoms but about using no sulfur or other additives. The label above (there’s also a shiraz) is mevushal, a concession to Royal, one of his American importers. As chardonnay goes it’s pretty okay; gritty and refreshing. While the pasteurization has taken its toll, snuffing out some of the life, it remains untarnished by oak and manages to be pithy and have some interest, it might be a match for the hard to pair gefilte fish, and certainly would swim well with a browned up capon.

However, the Aziza wines (chardonnay and shiraz) are Richie’s babies. Aziza was the name of his late Grandmom. The much adored matriarch emigrated to Israel in 1929. Nothing but the full-throttle natural stuff would justify invoking her name. For these he teamed up with another importer who agreed to treat the wines more gently and ship in cool containers. The wines have been celebrated by secular reviewers such as Jancis and Andrew Jefford and in Australia is distributed by the fab wine guy, Andrew Guard. I’ll be watching Richie. He’s the next step for kosher wine.

Anyway, best of luck to you and remember there is always Slivovitz. I do love the rot gut, have plenty of youthful fond memories and nothing else gives you that burn. Otherwise, you can always go really cheap with a Golan Sion Red–which is sort of the Hearty Burgundy of the Kosher wine world. It is a quaffable no-brainer, do no harm and for $11 bucks? It will do the trick. Chag semeach, and have fun making the horseradish.

Either foreswear fucking others or the affair is over. This was the ultimatum, the maddeningly improbable, wholly unforeseen